I’ve only just discovered that they’ve made a new version of Roots. Not that I’ll be watching it; I saw the original and it was a load of racist claptrap. It was just pandering to the PC brigade and white-haters out there. Roots II was even worse, glorifying terrorists like Martin Luther King and Malcolm X. I’m sure there were even bits in it featuring the Black Panthers. Such blatant anti-white racism shouldn’t be allowed and shame on the BBC for showing it!

In case you think I’ve gone all Tommy Robinson on you, I’m just echoing the sentiments of the Vanguard Bears. Hector happened to mention them, so I went over for a peek – and, Jesus Christ, the cunts are absolutely mental! They’re trying to get some guy sacked for chanting “The Huns are going bust” more than six years ago. Maybe they could explain why that’s anti-Protestant. I know they always insist that ‘Huns’ means ‘Protestants’, so who do they believe was ‘going bust’? Was the Church of Scotland in financial straits? Or the Free Church? Or maybe it was the Church of the Blessed Dinosaur in Northern Ireland.

The Green Brigade, meanwhile, are a bunch of terrorist supporters, apparently, and Call It Out is just an excuse for anti-Protestant rallies. Where the fuck do they get all this shite? The frightening thing is, though, that The Peeppul believe every word of it. Why? Well, if you’ll pardon another shameless plug, you can find out in my book The People. You’ll discover how, after the Reformation, they were at the bottom of the heap and it was all downhill after that. They were bred to be thick and violent and, by God, was that a successful venture!

Steve Gerrard, meanwhile, is getting a bit carried away with himself. He says of tonight’s match at Easter Road, “We all know this is their manager Neil Lennon’s big fixture”. How the hell does he make that one out? Talk about big-headed! So, beating Celtic was no big deal; it’s playing against Neo-Gers that counts. Oh, right, they’re at the top of the table at the moment, but somebody needs to tell Gerrard that the season doesn’t finish until May. They’ve won nothing and they still are nothing. And Neil Lennon knows that as well.

The Peeppul themselves seem to be split over the racism of their good friends, fellow bigots and favourite scapegoats, Chelsea supporters. Most of them think that the whole thing is a ‘witch hunt’, especially the guy being accused of racism against Raheem Sterling. This comment sums up how they feel:

“Nope, trial by social media has declared him guilty.

Not defending the guy if he is guilty btw but he deserves to be innocent until guilty like everyone else.”

They’re all banging on about lack of evidence etc. Strange how they never felt that way about Aleksandar Tonev.

Have you seen this: https://www.rangersprotect.co.uk/life-insurance/? You can take out different policies and, apparently, help your club at the same time. Now, what I’d want to know is, who’s underwriting this enterprise? The website says, “Rangers Protect is a trading name of Saveonlife.co.uk Limited which is an appointed representative of Lifetime Protection Services Limited”. Google Saveonlife and Lifetime Protection Services and you’ll find that both of them are brokers, linking folk up with established insurance firms.

That still leaves the question of who is underwriting the Neo-Gers policies. Is it Honest Dave or the Neo-Gers board? Who the hell would be stupid enough to sign up? Well, stupid is practically a synonym for The Peeppul. You just know that they’d never pay out, even if you die. They’ll just give somebody else your name and claim you’re still alive; your spouse and kids will get bugger all. Either that or Gerrard will get handed all the cash in January, leaving only enough for one payout. The whole thing will end up as a tontine!

I remember reading somewhere that Eric Blair (George Orwell) once said that the worst thing about being a socialist was some of the folk that were on your side. It’s the same when you support Scottish independence; there are some absolute cunts out there on the independence side. One of them was responding to some guy that bemoaned the ‘faux’ Scots being peddled to school kids. I’m sure you’re aware of my opinion on this and decided to back the guy up. Cue the outrage. Apparently, the Scots that Robert Burns spoke was ‘beaten out of’ children at school, where they were made to learn Standard English. So, how come we don’t all speak Standard English?

I pointed to those ridiculous ‘Itchycoo’ books, with their centuries-old, Rabbie Burns style of language. Nobody speaks like that, so what’s the point? One clown said that the point was that the children will pick up those old words and end up speaking ‘proper’ Scots again. He couldn’t see the irony in this. He was arguing that Scots had disappeared because kids had been ‘forced’ to speak Standard English. Obviously, he has no idea how working-class, Scottish people speak, but wants to force his version of how they should speak onto them. What a fucking tit!

I was speaking to the seven-year-old daughter of my daughter’s partner the other night. (I don’t know what you’d call her – my step granddaughter?) She was in stitches when I was telling her about when I was ten and was at the swimming pool in Kay Street in Springburn. We were suddenly alerted by all the so-called lifeguards to get out the pool. There were screams and yells and rumours of crocodiles and piranhas as we scrambled out of the water. It turned out that it was worse than any aquatic predator – it was a huge shite! The underside of the shite was bleached white, making it look even more sinister. One of the ‘lifeguards’ fetched a long, wooden pole with what looked like a wok on the end and scooped the shite out of the water. We were then told we could go back in, but none of us did. As far as we were concerned, it was no longer water but jobby soup!

As you can imagine, such a story is hilarious to a seven-year-old, but there’s a serious side to consider. Nowadays, the pool would have to be closed so that it could be thoroughly cleaned. That kind of law is thanks to the EU. Now that the UK is leaving, will we be going back to the old ways? And with the serious lack of money, there’ll be nobody to scoop the shite out. Going to a swimming pool will be a case of taking your life in your hands as you swim through raw sewage. The only answer is Scottish independence. Unfortunately, some folk seem to think that means we all need to speak like Robert Burns!

And, apparently, everything is going to be so bad after Brexit that the Government is getting the troops prepared to do battle in the streets. I don’t know if they’re expecting a revolution or what. The more likely scenario is that they’re expecting a bit of backlash about that backstop business. The army is already in training to fight with hordes of dinosaurs as the DUP storm Westminster with squadrons of tyrannosaurs and velociraptors. The navy’s battleships are doing manoeuvres in the North Channel, preparing for shoals of ichthyosaurs, while the RAF is getting ready for a new Battle of Britain against flocks of pterodactyls. General Gregory Campbell, meanwhile, is in the fuhrerbunker, pushing plastic models of prehistoric monsters over a map of Britain. It’s going to be the war to end all wars!

That’s the paperback version of The People available. You can get it here. As usual, Amazon takes ages to realise that this paperback is the same book as the Kindle version, so they’re on separate pages. The Kindle version is here. 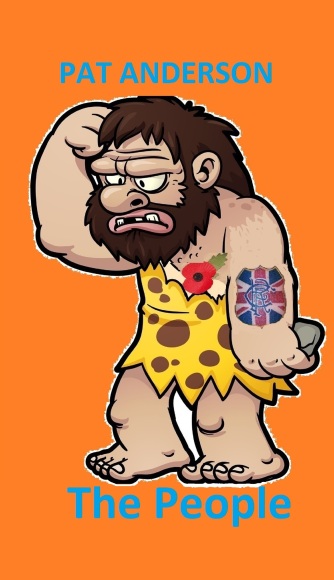