The Daily Record had a story the other day about how Jim Torbett got Legal Aid to the tune of nearly £20k; a disgrace, according to the DR. As they put it,

Cheat justice? Isn’t a court case the whole meaning of ‘justice’? Apparently, though, the DR has a different definition. How do they suggest that justice is served? Maybe it should be left to the denizens of Hun Media to decide if somebody’s innocent or guilty. Probably that’s what the DR believes, since their article reads like it was copied from Follow Follow or something. Look at this:

“Celtic Boys Club had close links with Celtic FC. After Torbett’s second conviction, Celtic FC said the boys club were “entirely separate” but expressed “deep regret” about the abuse.
Victims and their families have described Celtic FC’s response as disgusting. They accuse the club of trying to distance themselves from the boys club.”

What’s disgusting about it? Actually, I haven’t seen or heard of the victims and their families making any such claims. You need to go to Hun Media for that kind of thing. ‘Justice’ according to the scum on Hun Media would be for Celtic to be fined so much that they go out of business. They don’t give a fuck about victims, as they showed with their attitude toward the guy that claimed he’d been abused by Gordon Neely. This man was called a money-grubbing bastard and a ‘Raynjurz-Hatur’ that was trying to damage the club!

Strangely, or more probably not, the DR seems reluctant to look into Neely at all. It’s been claimed that Rangers called the police and made sure that Neely never worked in kids’ football again. Remember, though, that the police have no record of this and that Neely went on to train and abuse other boys after he left Ibrox. Nobody’s interested, though; it seems that the Ibrox clubs were and are better at covering things up than others. That Masonic connection comes in handy!

Meanwhile, Sperm Heid, Gary McAllister, has been moaning about Neo-Gers’ fixture pile-up during December. They’ve only had one more fixture than Celtic, but it looks like they already want the season extended. In fact, the fairest thing would have been to start the Winter Break early, so that Neo-Gers could have ended the year at the top of the table. Aye, those ones at Hampden really have it in for the Ibrox club!

There’s also some shite in the papers about Celtic looking to get their hands on ‘marquee’ signings, Jermain Defoe and Andy Carroll. Neither of these characters have exactly been setting the EPL alight lately, so I think it’s a big ‘No thanks!’ In fact, I wouldn’t call them ‘marquee’ signings; they’re more like ‘bivouac’ ones!

Away from football, and, like a lot of other people, I’m struggling to believe that Gatwick Airport was brought to a standstill by a drone. Correct me if I’m wrong, but aren’t those things minuscule compared to a plane? And they’re made of plastic as well, so your average 737 is hardly going to come off worse in a collision, is it? Presumably, these drones have been spotted around the airport,  so why don’t they just shoot them down? It could be done with an air-rifle, or even a catapult with a decent-sized chuckie. Christ, you could probably even do some damage to one of the things with a spud gun! God knows what the hell’s been going on.

In the spirit of Christmas, the usual surveys have been done to find out what everybody’s favourite Christmas films are. 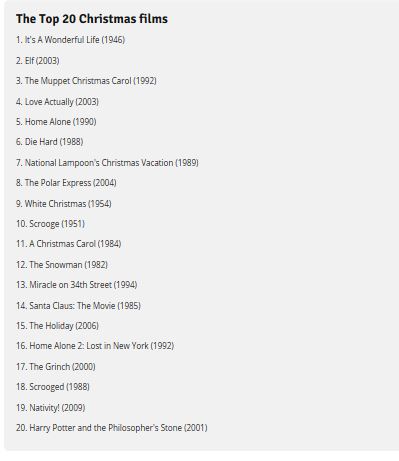 Quite obviously, I’m not filled with the Christmas spirit after seeing that. I don’t know if it’s legible enough, but Elf at Number 2? I could only watch half of that before I got bored. And how, in fuck’s name, is Harry Potter a Christmas film? Love Actually? The unfunny Muppets? And that middle-class pish, The Snowman? They’ve even got that fucking awful remake of Miracle on 34th Street instead of the much better original. And has anybody ever watched White Christmas? You’ve got to sit and suffer the God-awful Danny Kaye for about an hour or more before they actually get round to singing the song.

Even It’s A Wonderful Life isn’t actually a Christmas film, even though, if I remember right, it’s Christmas at the end and the message is certainly Christmassy. It’s quite telling, though, that my daughter declared that it’s a classic and deserves its place on the list. I asked her what it was about and she said it was that film with the department-store Santa that’s actually the real one. If other young folk are like her, then no wonder that list is so fucked-up!

My granddaughter, meanwhile, who will be 3 in January, has discovered that Alexa will respond to her voice as well as those of her parents. This means that, while you’re watching something on the telly, she’ll sneak up and tell Alexa to play Baby Shark songs. I haven’t found out yet if she does this all the time or if she was just showing off to her grandad. She’s all excited about Santa coming and can’t wait for Christmas Day. Hopefully, when we go up for Christmas dinner, Der Fuhrer can try and smile for a change and not spoil things!

I hope everybody has a great Christmas and that Santa’s good to you. I won’t bother with any book advert – if you haven’t already ordered it for Christmas, you’re too late! See you all after the festivities. 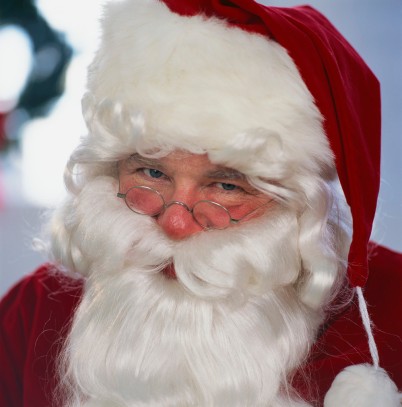