Back in 1998 I started at yet another primary school in Glasgow. It was a P1 class, which I’d never had before so I was dreading it. It turned out to be not so bad and I got on really well with the children, which I usually did, probably because I have a similar sense of humour. The big problem I had with working in Glasgow was that I could only get supply work, even though it was long-term. I’d been doing supply for six years, all the while applying for permanent posts that I never got. I even applied for jobs outside of Glasgow.

Out of the blue, I got an interview at Whitecraig and, a week later, was offered the job. Now, I enjoyed working in Glasgow and had got quite attached to my P1 class. Der Fuhrer preferred living in Glasgow and there was a lot more there for my daughter to do. What else could I do, though? I couldn’t be guaranteed constant work in Glasgow, so I had to take the Whitecraig job and we had to move. Things didn’t exactly work out that well, but I wasn’t to know that at the time. Some of my wee P1s, by the way, cried when I told them I was leaving. Mind you, if I’d gone back a few months later, they’d probably have asked who the hell I was!

As you’ve no doubt guessed, I’m alluding to the Kieran Tierney situation. Why the hell anybody should give him a hard time over moving to Arsenal is a bit over the top. Yes, he loves Celtic, no, he probably doesn’t want to leave but a footballer’s career is a short one and he’s got to do what’s best for himself and his future.

Of course, The Peeppul and the agnivores are in two minds over how to react to the news. On the one hand, they’re glad that Celtic’s losing an excellent player, on the other, they hate the idea that Celtic has another £25m in the coffers. Plus, there’s the fact that nobody wants any of their ‘stars’. Does anybody believe that West Bromwich Albion bid £10m for El Guffalo? Well, The Peeppul do and they’re all happy that Neo-Gers ‘turned down’ the ‘bid’ and Morelos will be staying. The DR, meanwhile, has cleared things up regarding bids from China. Just in case anybody got in touch with Hebel Fortune, the DR says that it actually wasn’t them that made the bid, but ‘another’ Chinese team. They also say that, “Morelos could still leave to a major league in Europe before the end of the month”. Can’t they get it through their skulls that nobody wants the fucking red-card magnet?

The Scottish media is going overboard to make excuses for the Huns. It seems that there was a ‘crush’ outside Rugby Park, even though there were no barriers and plenty of room for even the Huns’ XXXXXXXXXXXXL bodies to stand clear of each other. It reminded me of the film, I Robot, when they talk about how robots in storage all huddle together in the corner instead of spreading out. And those machines were a lot smarter than your average Hun, so there’s obviously something strange going on.

“Wur gonny miss the start-y the game, ya cunt!”

The fact is that The Peeppul don’t like wide, open spaces. You’ll notice, every July, that they like to walk along the streets in ranks, with the polis hemming them in on either side. The videos of the exterior of Rugby Park show only one polis on a cuddy, so The Peeppul evidently didn’t feel safe. That’s why they were all huddled together near the entrance. The blame, though, is being put on the folk checking the tickets, with one complainant saying that they took five minutes to scan his ticket. Maybe if they hadn’t already scanned the facsimiles he’d given to his mates, then there wouldn’t have been a problem!

Over on Hun Media, you can virtually taste their tears of rage. One of them has accused Celtic supporters at last night’s match of waving a Communist Romanian flag. Christ, they’re getting desperate! And they’re all over the story of the Neo-Gers women’s team being verbally abused, even though nobody seems to be able to provide any details. You’ve got to laugh at them blasting their board for not sticking up for them, Most especially delusional is this one:

“Don’t forget that fat piece of shite . James Traynor who I feel is majorly responsible for our silence on all these attacks.”

Christ, it was Jabba that probably invented this pish to deflect from their behaviour at Rugby Park! They don’t live in the real world at all. A couple of other, linked, statements prove that they’ve no self-awareness whatsoever:

“They are born scum and will die scum.”

“No one is born scum really, its bred into them, parents breed hate into kids.” 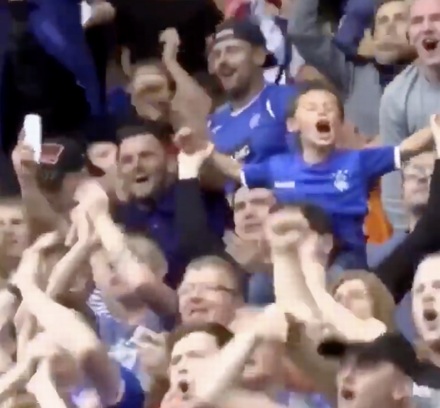 Did you read about that plane that had to make an emergency landing when it filled up with smoke? Apparently, all the passengers were terrified, but every cloud and all that. To the guy hiding in the lavvy to have a sneaky fag, it was a bloody godsend! I remember we were on a plane to Portugal when the pilot informed us all that some ‘selfish individual’ had been ‘putting all our lives at risk’ by smoking in the toilet and that the police would be awaiting him at Faro Airport. It seemed a bit of an overreaction to me. Back in the 70s and 80s, when half the passengers were coughing their way through the duty-frees, I don’t remember all the planes falling out of the sky. And when I was at school, I remember that you couldn’t smell the smoke on a plane because fresh air was constantly pumped in. Now, everybody’s struggling to breathe because of the recycled air. Progress, eh?

The Embassy Regal Crash of 1976. Luckily nobody was killed.

I saw a bit of a programme last night with Sean Locke. He was about as funny as getting your baw-sack caught in the zip. One thing he mentioned was how everybody says they want to swim with dolphins, as if it’s the greatest thing in the world. It’s a thing I don’t understand. I’d rather swim with a gaggle of naked, nubile young women, who are all inexplicably in love with me. In fact, we can take the swimming part out completely. Anyway, what’s so special about a dolphin? The brute doesn’t even know that it’s not a fish. And there’s a saying I’ve seen a lot on Twitter – Get in the sea. I don’t fully understand it, but it’s generally said to stupid cunts. So, away back in the mists of time, a certain mammal was told to ‘Get in the sea’ and it went ahead and complied. And these creatures are supposed to be intelligent? If they had even a shred of intelligence, they’d tell all the arseholes that want to swim with them to fuck off! You wouldn’t see sharks letting cunts ride on their backs or hold onto their dorsal fins for a hudgie.

“Listen, ya cheeky basturt. Ah’ve goat Higher Widwork! No’ thit it’s been much use tae mae in here.”

Have you seen that vomit-inducing article by Neil Cameron, moaning about how the word ‘Fenian’ has no place on a Celtic banner in this day and age? After all, times have moved on since his uncle’s day and Catholics are no longer treated like second-class citizens, are they? Talk about being out of touch! While racists in England have been encouraged to attack foreigners in the name of Brexit, our own versions constantly make it clear that those of Irish descent are to be treated the same way. According to Neil Cameron, we should ‘move on’ which sounds a bit Jabba-ish. Sorry, Mr. Cameron, but the days of sitting at the back of the bus are over.

Details of all my books can be found here:

Remember, if you’re skint for any reason, just drop me an e-mail at andrsptr@outlook.com and I’ll send you Kindle copies of any of my books for free.